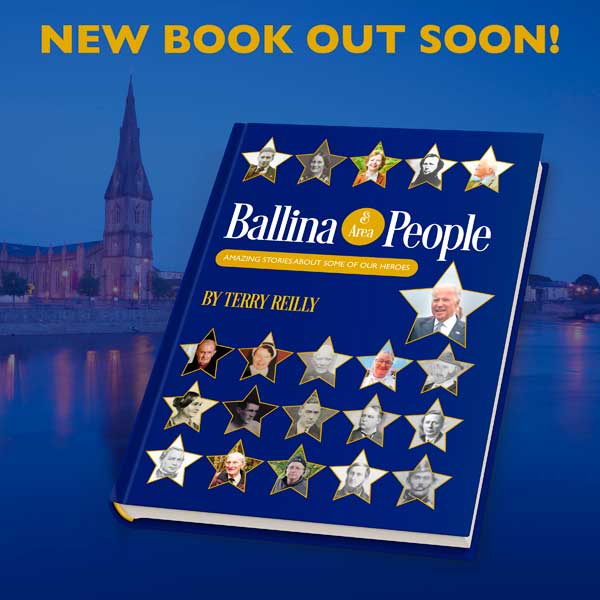 My latest book, a limited signed edition, Ballina & Area People is out mid-January 2021 and features greats who were from or are connected with the area Amongst those featured are (in alphabetical order):

Copies of Mayo’s Forgotten Famine Girls and Ballina, One Town, Three Wars and More (it deals with WWI, The War of Independence and the Irish Civil War and the people involved over the north Mayo area and beyond) can be obtained from www.kennys.ie  who post throughout the world. Kennys offer most competitive prices including worldwide postage. MayoBooks.ie also offer similar service. Both highly recommended. Books are signed.  Some stockists who were out of my books (Amazing Mayo Stories, On A Wing and a Prayer, Dear Old Ballina, Mayo’s Forgotten Famine Girls,  Ballina, One Town, Three Wars and More, A Rambling Tour Through Dear Old Ballina,  and The Green Above The Red) have been restocked for Christmas/New Year: These include The Book Shop in Westport, Castle Books, Castlebar, Ireland West Airport Knock, Easons of Ballina and Castlebar, North Mayo Heritage Centre at Ennioscoe, Crossmolina.

Festive greetings to all readers throughout the world.

Browse and buy Terry Reilly’s collection of published books, which are all available for sale via PayPal.

Digital photographs of landmarks in Ballina, and surrounding regions are available from my collection, with accompanying historical text.

Visit the blog of Terry Reilly and browse through a vast selection of articles on a large selection of topics.

IMPORTANT! CHRISTMAS ORDER NOTICE: All Orders for Christmas MUST be with author by December 4th. No book despatches for Christmas/early New Year after that date.

On a Wing and a Prayer! An ideal Xmas Present! Signed copies of the book (and other books by Terry Reilly) …for paypal facilities see The Books Section Of This Site Also on sale Castle Book Shop, Castlebar; Easons and Clarkes, Ballina, Knock Airport and Knock Shrine. 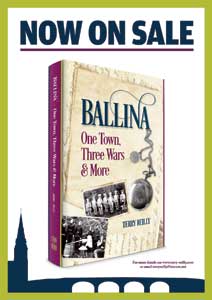 432 pages of life in the Ballina/North Mayo/West Sligo and further afield. Hardback with photos and QR coding to relive the moment. Really special production with comprehensive Index. It will surprise, shock, inform and entertain the reader with a narrative covering the period of your parents and grandparents. 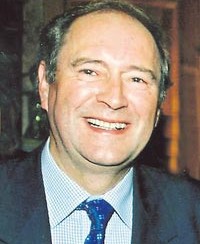 Terry Reilly is a native of Ballina, population 10,000, in North Mayo in the province of Connaught. Editor of the Western People for nearly 30 years, his first book, The Green Above The Red, (1985) written in association with the late Ivan Neill, chronicles the successes of Mayo Gaelic games. Again, rare photos as great deeds of our football heroes leap from the pages.

Ballina is a lively town in picturesque County Mayo in the west of Ireland. It lies at the mouth of the River Moy, famous for salmon fishing, near Killala Bay with the Ox Mountains to the east and Nephin Mountain to the west. Situated in the Catholic Diocese of Killala, its population is just over 10,000 people.

One of the most fascinating parts of an area’s history is its people whose stories make up the fabric of the place. The footprints of many people from Ballina and its hinterland have landed all over the world, and their influence is wide. Well-known local historian and author Terry Reilly shines a light on many of these in his new book, Ballina & Area People. He was well placed to write such a social history of his native area having been editor of the local newspaper, The Western People, for almost 30 years.

The footprints and legacy of Irish missionaries are to be found in most countries in the global south, where they have provided services in education, health, special needs, agriculture, income generation, human rights, social justice, peace-building and other areas that impact the dignity of the human person and the protection of the environment. Almost every town or parish in Ireland provided men and women who joined that army of missionary ambassadors who devoted their talents and their lives to supporting the poor and the marginalised in developing countries.

Ballina was no different in that regard, and it is wonderful to see Terry Reilly devoting a chapter of his book to missionaries from the area. He introduces the chapter with a very personal account of the high esteem in which Irish missionaries are held in Africa.

He writes: “The role of our Irish missionaries was brought home in a most dramatic way to me when visiting Robben Island, a bumpy 30-minute ferry ride from Cape Town in South Africa, just a few years after Nelson Mandela’s 27 years’ cruel incarceration had been brought to an end.

“Those who have been there will know that you are taken on a bus tour around the island. It was on one such bus that we were welcomed aboard by a lovely black African woman who had herself suffered under draconian apartheid separation laws. After introducing herself, she asked a question she always posed: ‘Where are you all from?’ The answers that came back confidently included ‘England’, ‘America’, ‘Germany’, ‘Malaysia’, ‘Hong Kong’ … Somewhat shyly I offered, ‘Ireland’. ‘IRELAND, IRELAND!’ our guide exclaimed. ‘The one country that came to the aid of our people confined here when it was a leper colony. Your missionaries and what they did here will never be forgotten. You are most welcome. Do you know there is a place here called the Irish Village?”

Reilly uses the story of Sister Mary McNulty from Rathowen near Killala who joined the Pallottine Sisters to illustrate the innovative work that missionaries undertook in developing countries and how that work is now being continued by local sisters who were recruited by the Irish.

Rapidly dwindling stocks of Amazing Mayo Stories, On A Wing and a Prayer and The Green Above the Red, so order these original copies now!

For best prices for Mayo’s Forgotten Famine Girls and Ballina, and  One Town, Three Wars & More (all signed by author) see fantastic prices, including postage, through kennys.ie

NEW: FANTASTIC OFFER NEWS: Those wishing to buy a copy of either or both of my two latest books, Mayo’s Forgotten Famine Girls -Sent to Australia 1848-50, and Ballina, One Town, Three Wars and More should avail of exceptional purchase-and-mail offer now available through www.kennys.ie ….. all for 25 euro per copy worldwide. Unbeatable!  In shops book actually cost 25 euro, so postage and packing essentially comes FREE. Ideal for anyone wishing to send a copy to a friend overseas, or receive a copy themselves without having to leave own house.  All copies are signed by author, Terry Reilly. Ideal for those Christmas gifts. My other books are available at www.terry-reilly.com and at outlets as listed . See www.terry-reilly.com for details.

Books by local authors can be sourced. Email me for an up-to-date list of local publications or books about Ballina/Mayo in general.

Terry Reilly’s Guided Historical Walks of Ballina are held in July/August. Assembly point: Presbyterian Church, Walsh Street, off Pearse Street. A 90 minute walk on which we meet characters from the past, and hear the story behind local landmarks. Dates and times available in local Tourist Office, Cathedral Road, or by contacting me by email Proceeds in aid of local charities.

Your books are gems Terry Reilly.

Apart from being a great read, there were my people, on your pages. You showed me the first photo I’d seen of P.J. Ruttledge, explained why I was connected to Hannick’s pub, delighted me with Mona Curry’s sketches such as the ones showing my great grandfather’s shopfront (and I learnt the shop was established in 1893) and so much more. You even provided me with a little puzzle. I noticed that John Egan & Sons separate my McConn’s shop from Beckett Ltd and must get around to figuring out if that is the Beckett my grandmother McConn married when her husband passed away. It was exciting turning the pages!

A hit in Brussels!

Councillor Gerry Murray of Charlestown recently put a smile on my face when he recalled visiting Brussels  few years ago with Matt Carthy for a meeting with senior officials from the EU Commission. “It was in relation to state aid regulations pertaining to Knock airport.  Before getting to the main item on the agenda, Matt (now a TD) thought it might be a good idea if I gave them some background on the airport,” said Gerry.

He went on: “I started to give them the broad strokes of its history, when the two lead Commission officials smiled, opened their files, and produced two copies of your book,  ‘On A Wing and a Prayer’.  They obviously had done their research, so we just moved on to the main issue on the agenda.  After the meeting, we had a coffee and discovered not only had they thoroughly read the book, but they said it gave them a unique insight into the politics and the difficulties in delivering infrastructure to the rural regions of the EU, and very often the impediments that nation-states put in the way.  Unlike most books on regional development, they said it was a real page-turner,  with wonderful anecdotes and lessons to be learned for Nation-State in terms of how they should engage with their respective regions.”

*On A Wing and a Prayer was published in 2006 and dedicated to the late Monsignor James Horan. It is now almost out of print. See www.terry-reilly.com